The evening was centred around the hardware kindly brought along by John Cooper of Discover Linux.

We all got a chance to tap away at the devices and generally man-handle them. It was a quieter meet than normal, everyone was too engrossed, also evidenced by less trips to the bar!

The XO was heavier than expected, and I found the keyboard just a bit too small for easy typing. I used to use a rubber ZX Spectrum keyboard without problems when I had smaller hands, but I think the key tops are smaller on the OLPC with more space in between them. But I'm not the intended user of course. The screen was good, and the reflective mono-mode looked good, even in the dimmed light of the pub; dimmed because of the football playing on the main bar's screens. Overall, a very clever hardware design, it felt very robust, but I'm not sure if I'd make much use of one at home given the keyboard.

I didn't play with the Zonbu laptop much, but it looked pretty standard. The idea, AIUI, is to provide a locked down Linux OS with applications to do all the standard activities for a low price and regular subscription fee. As well as the laptop, they sell a much cheaper appliance for your own screen and keyboard.

Most, including me, seemed impressed by the Koolu. It's a small, weighty, appliance with Ubuntu pre-installed into which you plug your screen, keyboard, and mouse. Canada are apparently using them a lot in schools and one of the biggest cost savings they're seeing, compared to a PC, is in air conditioning since the Koolu has no fan, the case acting as a heat sink. It comes with a flash drive or 80GiB laptop hard drive. There's a port for the wi-fi antenna and space for the internal wifi-card. If I wanted a “thick” client for the home network in another room, this would be hard to beat.

The Eee PC surprised me. I was expecting to like the XO more and dislike the Eee's smaller screen. The XO was good, but for practical use the Eee's keyboard was easily more usable, at least for the normal A-Z keys. The slight annoyance was the ridge in front of the keyboard got in the way of my thumb tapping the space bar. It's got a heftier CPU than the XO or Koolu, but being of more standard design, battery life is more like a normal laptop than the XO; indeed, it ran flat towards the end of our playing with it. The screen, though small, was very clear and bright. An 80-character wide xterm was readable while only taking half the screen width. A full screen terminal could be set up with quite large text. Given it's price, and availability, the Eee looks like a useful gadget, but best of all was my realising that it has a VGA port so you could connect it up to your a normal sized screen and keyboard. Asus's web site seemed poor on data, you may find Wikipedia's page better.

I only really played with the XO and the Eee PC. The Zonbu looked fairly useful, but it wasn't particularly attractive to me. Similarly, I had a look at the Koolu, but only really appreciated it when I saw it's specs at the website after the meeting. I didn't even realise there was a PDA there

I had previously played with the Sugar interface on the XO through the downloadable Live disc (http://olpc.download.redhat.com/olpc/streams/sdk/build1/livecd/olpc-redhat-stream-sdk-build-1-20070403_1732-livecd.iso), so I had a fair idea what to expect software wise. Of course some things cannot work on an ordinary PC because they are simply not fitted so it was nice to see various functions in action. I was impressed with the screen performance, the built in webcam and the wealth of different apps available.

The Eee PC was a pleasant surprise. I had heard some bad stuff about it, not least because some people put it into the same category as the Intel Classmate, eg as a direct competitor to the XO. I think that this is a bit unfair, because it is much more like a normal laptop in terms of functionality, and its performance was surprisingly good.

All in all a great night out and much better than watching the footie in the other bar.

Thanks to Peter Washington for the impromptu snaps. The thumbnails are links to medium sized versions which in turn link to the largest size. 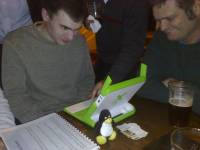 Ralph and Simon look on while John's hand operates the XO. 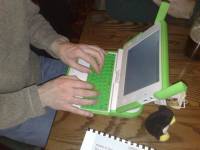 Ralph's hands on the XO. 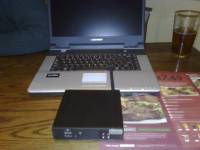 The front side of the Koolu, with the Zonbu behind it. 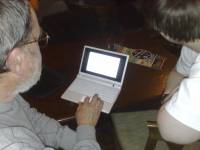 Clive and the Eee PC. 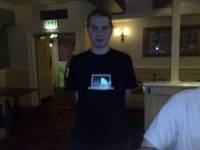 A dim Andrew Morgan with his wi-fi detecting T-shirt.

Except where otherwise noted, content on this wiki is licensed under the following license: CC Attribution-Noncommercial-Share Alike 4.0 International